Is it Snoring or Obstructive Sleep Apnea?

Snoring is extremely common and in many cases, relatively harmless. Nearly everyone snores at one time or another. Occasional light snoring, at worst, is a minor annoyance. Loud and habitual snoring can disrupt your sleep and may be a sign of a much more serious sleep disorder – Obstructive Sleep Apnea.

Snoring is a sound that occurs in the upper airway as you breathe in air. The unmistakable sound is a sign that your airway is partially blocked, usually by soft tissue in your throat. The flow of air causes the soft tissue to vibrate, generating the noise, which comes out of your nose, mouth or both.

The volume of snoring depends on the person. You may snore so loudly you wake yourself up. Snoring may also cause you to have a dry mouth or to wake up with a dry mouth and a sore throat. 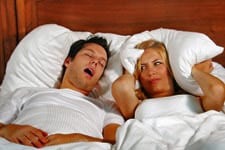 Obstructive sleep apnea frequently goes undiagnosed because people often mistaken the serious sleep disorder for snoring. About half of loud snorers have some form of sleep apnea.

Snoring and Obstructive Sleep Apnea have similar causes. Sleep apnea happens when the tissue in the upper-airway blocks the entire airway, causing a pause in your breathing. The blockage keeps oxygen from reaching your organs including your heart and brain. When the blood-oxygen level drops low enough, the body momentarily wakes up. It can happen so fast that you may not be aware you woke up.

Snorers who suffer from sleep apnea may make gasping, choking or snorting sounds as they try to breathe and feel drained of energy during the day.

If you think you have Obstructive Sleep Apnea, call our office for a consultation today!